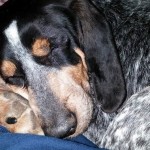 Oh how curious the AHAH team was about George!! This month’s pet spotlight is a 9yr old coonhound named George (Miller). George came to us with blood in his urine and straining to urinate. His owners were very worried about him. After examining George extensively and performing various diagnostic tests, our doctors discovered a stone lodged in his urethra preventing him to pass any urine. Poor George was experiencing great pain and discomfort. Our doctors surgically removed the large stone and also 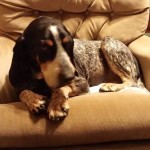 discovered many smaller stones that were removed as well.  Later that evening after George recovered from surgery, he was able to urinate normally again.  Now George’s owner reports that he is doing very well.  He is back to his old self loving life and sleeping on the couch.