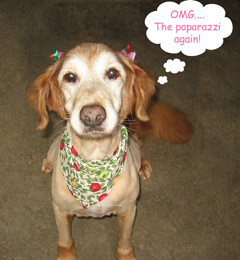 We would like to introduce you to “Litty Dog” Akers. She is an adorable Golden Retriever who turned 16 years old this past June. The Akers have been coming to Asheville Highway Animal Hospital since 1998. Litty was diagnosed with Kidney Disease in 2007. Her parents do a wonderful job maintaining her kidney disease with medicine and prescription food, and lots of love!

In her younger days, Litty liked to chase squirrels and rabbits and make sure their other two dogs (Dandy Louise and Sparkle Bear) were taken care of. She always prized her mommy and daddy’s attention over anything else and would rather have them talk to her and pet her than eat. She has the most precious and loving heart and disposition and brings great joy to everyone that has met her.

We would like to introduce you to Hoss Harrod. He is a Labrador Retriever who turned 10 years old this past January. The Harrods have been clients of the Asheville Highway Animal Hospital for 15+ years. Hoss’ first visit to the hospital was as a young pup in 1995 to receive vaccinations. Everyone knew at his first visit that he was going to grow into a strapping young man and he has by weighing in at 122 pounds.

Hoss is always very well mannered when he comes to the clinic and we all know who he is when he enters the building. He likes to greet all of our staff and is always ready and willing to receive his bath and dip (along with a doggie massage). He likes to run the fields where he lives and loves spending time with his family who adores him. We are proud to have the Harrods as part of our hospital family and look forward to serving them in the years to come.

“Fluffers” Wisner is 2 years old and belongs to Beull & Rachael Wisner of Knoxville. He became a patient of the Asheville Highway Animal Hospital in January 2005. Fluffers looks like any normal feline with one exception; he has been diagnosed with FIV (Feline Immunodeficiency Virus). FIV is a virus that compromises the pet’s immune system and its ability to respond to other infections. Common clinical signs include gingivitis, stomatitis, inflammation of the gum/mouth, weight loss, poor appetite, fever, swollen lymph glands, vomiting and diarrhea.

In January of 2008, Fluffers became lethargic and had a poor appetite. He was then placed on antibiotics and an immuno-stimulating drug by his Doctor. During this time frame, he also began running a fever for several months. By keeping track of his blood work, his doctor was able to closely monitor for any signs that his internal organs were working properly. Thanks to his parent’s faithfulness in regularly bringing him in for the injections, keeping track of his temperature, and administering medications as directed, Fluffers has been able to feel well again and act more like his cheerful self. As you can see from his photo, he’s doing very well.

A NOTE FROM THE WISNER FAMILY:
Fluffers, like several cats in the community, wandered into our yard one day and never left. Apparently he heard that we served wet food, and after terrorizing the neighborhood strays, he claimed ours as his official home. We were not looking for another pet at the time as we already housed 3 dogs and an FIV positive Tuxedo Tom, Chubbles (R.I.P. sweet fellow), but Fluffers pawed his way into our hearts and our home. Though Fluffers did not take kindly to Chubbles, he immediately attached himself to our 3 dogs. He quickly learned to sit for treats, to fetch, and to follow from room to room. Now when he isn’t eating his favorite foods (in large quantities) or purring on the bed, he spends his time running through the house, lounging on the deck, hunting for frogs in our backyard pond and playing with his doggie companions. 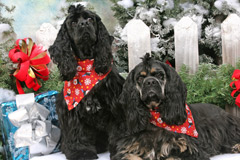 Rocky & Prissi Armstrong are 22 month old Cocker Spaniels belonging to Jacky & Judy Armstrong. The Armstrongs have been clients at the Asheville Highway Animal Hospital for 20+ years according to Dr. Joseph Kendrick. Rocky & Prissi are the apples of their parents’ eyes, and enjoy playing with each other and driving their parents crazy at times! Their favorite activity happens to be going camping with their parents and being the “hit” of the campground. We are proud to have the Armstrongs as part of our hospital family and look forward to serving them in the years to come. 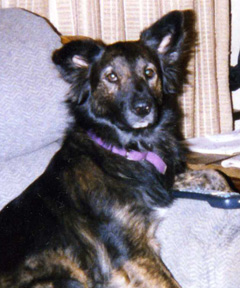 “Nikki” Gazikas is a German shepherd mix who has been coming to Asheville Highway Animal Clinic since June 21, 1996. On that day she received her first set of vaccinations. She is now 12 years old and was diagnosed in 2003 with canine diabetes. She is one of the sweetest canine companions anyone may ever encounter. Nikki has since lost her sight but remains almost as feisty as she was a puppy. Her proud owners are Steve and Sandra Gazikas. We wish Nikki the best as she continues to strive with her multiple medical challenges.