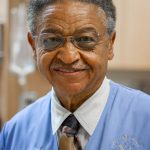 Dr. Joseph Kendrick, known affectionately as Papa Joe, is the owner and founder of the Asheville Highway Animal Hospital. Dr. Joe is a graduate of Knoxville College with a B.S. in Biology and Chemistry and a graduate of Tuskegee University School of Veterinary Medicine. He began practicing his dream in an 1800 square-foot facility that he opened in 1979. Devoted to the principle of offering top-quality medicine at an affordable price as well as treating every client with respect, he soon developed a loyal clientele. Dr. Joe was married to his wife, the late Gloria Kendrick,  for over 50 years and enjoys spending time with his grandchildren, fishing, and teaching others how to better themselves. 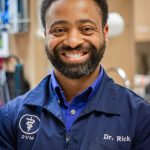 Dr. Ricardo Kendrick is the youngest member of our doctoral team, but he has been exposed to veterinary medicine since the age of three as the younger son of Dr. Joe and Gloria Kendrick. He received his B.S. degree in Biology from Morehouse College and his Doctor of Veterinary Medicine degree from Tuskegee University School of Veterinary Medicine. Dr. Rick is the husband of Melba and enjoys spending time with his family including his daughter, Elena, his son, Noah, his baby girl, Gianna.  He also enjoys reading science fiction books, working out, cooking and listening to music. 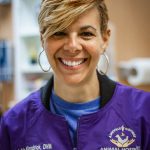 Dr. Reichla West-Kendrick joined the practice in 2000 as an associate veterinarian. She graduated from Howard University with a B.S. in Biology and from Tuskegee University – where she met her husband, the late Dr. Brian Kendrick – with a Doctor of Veterinary Medicine degree. Dr. Reichla brings an unrivaled sense of compassion to the practice and she also has a fondness for exotic pets. Dr. Reichla enjoys spending time with her son, Julian, traveling, swimming, and abstract artwork. 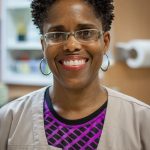 Dr. Lori Baxter joined the practice in January 2008; however, she has been practicing veterinary medicine since 1992. She is a graduate of Central State University in Ohio with a B.S. in Biology and a graduate of Tuskegee University School of Veterinary Medicine. Dr. Lori enjoys movies, fishing, traveling, and spending time with family. 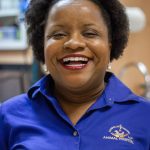 Melba Kendrick is the practice manager and is a graduate of Spelman College with a B.A. in Spanish and from Auburn University with a Masters of Education in Curriculum and Teaching Spanish. Before joining the family practice in June of 2006, she taught high school Spanish for over 10 years. She has studied in many different countries including the Dominican Republic, Costa Rica, Mexico and Peru. Melba is the wife of Dr. Rick and enjoys spending time with her family including her daughter, Elena, her son, Noah, and her baby girl, Gianna. She also enjoys volunteering within the community and her church, traveling, and home renovation projects. 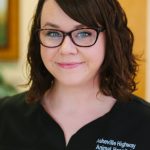 Amanda began her veterinary career in 2001 as a receptionist, later becoming front office manager, at a small animal hospital in Clinton, TN.  Seven years later, she moved to Knoxville and joined the AHAH team in September, 2008.  Amanda is a born animal lover who knew very early on that she wanted to dedicate her life to their care and well-being. She and her husband, James, currently have 3 dogs (Becky, Jasper, & Parker), 3 cats (Toby, Olive,& Colin) and a pot-bellied pig (Sammie) in their care. Amanda enjoys nothing more than spending quality time at home with her family, a good book, and a giant cup of coffee.

After acquiring a B.S. degree in Agriculture from Murray State University in Murray, Kentucky in 2003, Jessica expressed an interest in working in the field of veterinary medicine.  She worked in Key Largo, Florida before joining the AHAH team in March of 2007. Jessica began working at the front desk and eventually became a veterinary assistant.  Due to hard work and dedication, she was promoted to Treatment & Inventory Manager in 2013.  She and her husband, Chris, have a beautiful little girl, Dani, and a cat named Big Momma. In her free time, she enjoys spending time with her family, reading, and traveling.

Autumn joined the AHAH team in April 2015.   She was promoted to the kennel manager in June 2016.  She’s always been around animals and has had numerous dogs and cats as pets since before she can remember.  Even as a child she constantly took box turtles, toads, lizards, etc. home.  She currently has 3 dogs; a very spoiled senior boxer named Chaco, a very energetic senior dachshund named Cornelius (Corny for short), and a lazy pit/lab mix named Sofie.  In her small amount of spare time, Autumn enjoys playing with her dogs and spending time with her family.   She also enjoys reading, taking walks, drawing, traveling, photography, yoga, a nice cup of coffee or tea, and going on adventures. 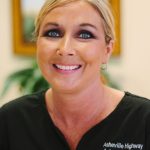 Susan has been with the Asheville Highway Animal Hospital team since 2000 and part of management and bookkeeping since 2016. She has 2 handsome sons,  Michael and Nicholas, that keep her very busy. She has 3 dogs that are spoiled rotten and rule the house. Susan enjoys exercising, reading and spending time with her family.