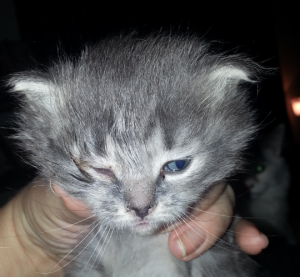 Meet Mongo!  This precious boy had a pretty rough start to life.  At 3 weeks of age, he and his sister, Cleo, were brought in by our veterinary assistant, Autumn, in need of immediate care.  They were presented with matted eyes, weak and unable to eat on their own, but were nursed back to health.  At 3 months old, Mongo began vomiting and losing weight quickly.  Upon taking radiographs, he was diagnosed with an extremely rare congenital defect known as Persistent Right Aortic  Arch.  It is a condition that is caused by an abnormality of the heart’s blood vessels in which a ligament is wrapped around the esophagus which made him unable to pass solid food.  The only way 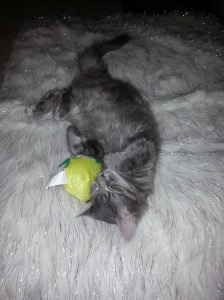 Mongo had a chance at a normal life was a very risky surgery in which his chest would have to be opened, and the ligament cut away from the esophagus.  This surgery has only been performed a few times on cats.  After days of researching, Dr. Rick and Dr. Lori performed the very tedious procedure.  Now at 5 months old, Mongo is a happy healthy boy who loves to play and even more than that, he loves to eat!  He shares his home with 8 other kitties and 2 dogs.  He loves his car rides daily to work with his mommy and napping in front
of the fireplace.